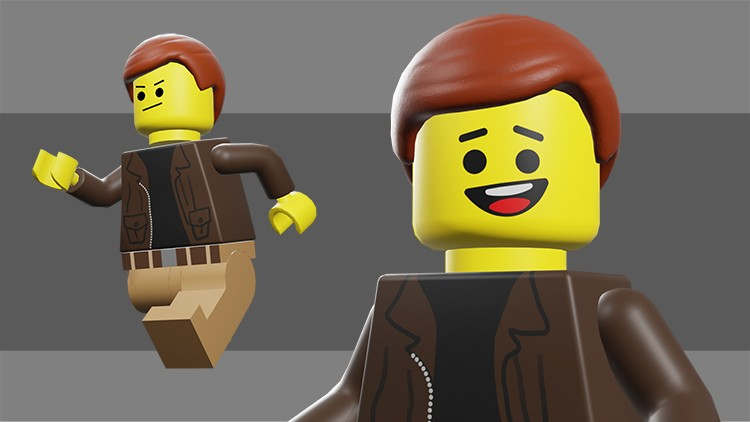 Requirements
You should have at least a little experience with Blender and Unity
We use all free software in this course: Blender 2.8, the free version of Texture Packer, and the Personal Edition of Unity
The instructor uses a graphics tablet in the texture painting and sculpting sections of the course

Description
In this course we’ll create a game character using Blender 2.8, and we’ll export it to Unity and configure it so we can control it in the game engine.

Beginning with the modeling, we’ll use Blender 2.8 to build all the individual pieces of a Lego character. And then you’ll learn how to UV map each of the parts, and then create an efficient, unified UV map of the entire character. We will use Blender’s texture painting tools to create the clothes of the character, and we’ll use the sculpt tools to create the high res details of the hair. You’ll then learn how to bake a normal map in Blender and apply the textures to the character model.

Next, we’ll work on rigging the character. We will begin with a single bone, and create the rig manually, so you can see how a character rig is built from the ground up. You’ll learn how to create a Foot Roll Rig and how to use Blender 2.8’s new process for creating Custom Shapes to control the character.

Once the rig is done, I’ll show you a cool technique, using Blender 2.8’s new Grease Pencil tools, to animate both a 2D drawn face and a 3D body at the same time. With this technique, we will create the character’s Idle, Run, and Jump animations, ready to be used in a game engine.

Finally, we will write a simple C# script to incorporate our 2D and 3D animations, and get the character running around the level.

Who is the target audience?
Anyone who would like to create a game character using Blender 2.8 and Unity

04.Texture Painting and Sculpting
0401.Beginning to Texture Paint
0402.Finishing the Base Colors
0403.Painting the Jacket Detail
0404.Texturing the Zipper and Belt
0405.Adding Sculpt Detail to the Hair
0406.Baking a Normal Map