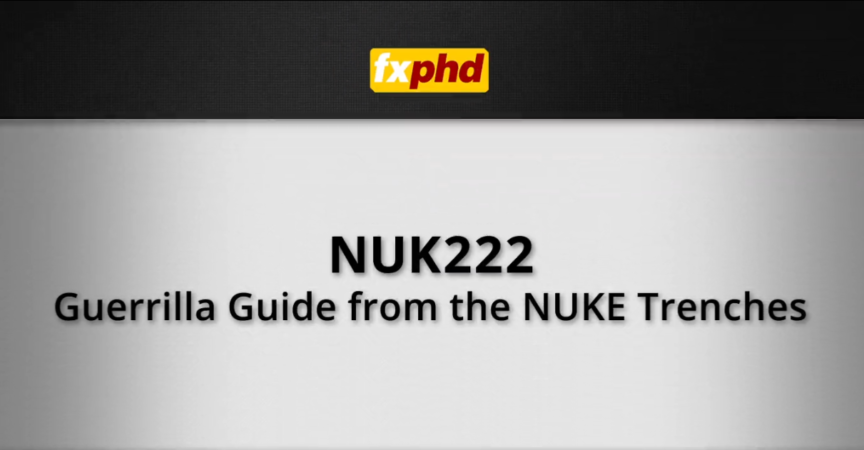 Over the years at fxphd, we’ve had a lot of great courses covering NUKE from a variety of perspectives. This term, we’re going back to our roots with a course covering techniques that solve problems compositors run into every day on the job. One of the great things about working with a group of artists is the ability to exchange cool tricks and techniques..it seems as though there’s always something to learn from your fellow artists. This course is in that spirt, sharing production-proven tips from the trenches that can help make your life as an artist easier.

The plan is to focus on core tasks; the bread and butter work of a vfx compositor. Over the course, prof Eric Deinzer will look at a variety of tasks, from difficult rig and wire removal, to comparing keying techniques between film and digital, to new relighting techniques, to retiming challenges, and more. And what about that client or director who *always* wants to review scenes frame by frame and zoomed in? Deinzer will be keeping that possibility in mind for the course, making sure that many of the techniques used can taken to that pixel by pixel examination level.

Rig and wire removal, Pt. 1 Even properly set up rig and wire removal can be problematic in post. Wires on green can generally be easily removed, but what techniques can be used to make your life easier when the wires cross in front of the foreground? How far can you take the tools before you need to dive in and paint?

Keying Techniques, Pt. 1 We examine and key film and digital footage filmed on the same setup with the same lighting. What issues come up between the two…from creating digital noise and film grain to dealing with underexposed shots.

Keying Techniques, Pt. 2. Edge hell. We continue the look at keying, including examining ways of integrating a foreground element that has been filmed with a bright green screen, yet ends up being composited over a dark scene.

Filmed at the 32ten shoot, we’ll complete the car drop scene and take it to a finished quality. We’ll be integrating smoke elements filmed separately as well as dealing with reflections on the car and windows.

The motion vector pass and its usage with the vector blur. Importing alembic files and usage of the new TimeOffset node for geometry and cameras. Creating a depth layer in place of one that doesn’t work and new depth of field with Zdefocus.

In class 10 we look at how we can make the best of a situation when your cg doesn’t match up perfectly. Here we go into using the provided lighting passes in unconventional ways to make it work. We finish up by using the relight node in order to finesse integration with the background. In doing so, we also take a brief look at using the position-to-points node as an aid to the relight.